Shiva is Hara and Shambho. He destroys worldly ties, resides in Mount Kailas, Lord of Parvati, Lord of all beings. He holds Ganga on His matted hair and is Lord of Gauri. 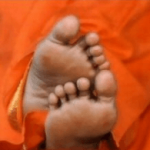 Value Inculcated: Team Spirit and co-operation.
Materials Required: 1 Chart, 1 Shiva picture, Marker per team.
Preparatory efforts: Collecting Shiva Picture from an old calendar or magazines.
Children should be divided in to groups. The team leader should stick Shiva picture on the chart. One/two children can write different names of Shiva around the picture while others prompt the names in the given time. The team with more number of names in their chart is the winner.

Lord Shiva is always portrayed as one from whose head the Ganga flows. Why is this so?

In the Rama Katha Rasa Vahini, Bhagawan explains the significance of River Ganga and also how she was brought down to earth. Baba says, “The Ganga is the supreme stream of Divine purity. The nectarine waters can confer immortality. She grants all that is beneficial.”

Bhagawan adds, “The Gods asked that Ganga be given to them so that they might have prosperity. So, Himavaan, the Deity of the Himalayas, gifted Ganga to the gods in order to secure their blessings, and benefit the three worlds. The Ganga that flows on earth is the Ganga that the Gods took with them. It has come down to earth and has three steps — one in heaven, one on earth and another subterranean.

During the Treta Yuga, there was a king named Sagara and he was an ancestor of Lord Rama. Owing to a curse by a sage, several sons of this king were reduced to ashes. A revered elder said they would be restored to their human form only by the touch of River Ganga. But this happened only many generations later when Bhagiratha, a descendant of King Sagara, became successful.

Bhagiratha did intense penance and was blessed with a divine vision. He heard a voice that asked him what he wanted. Bhagiratha expressed his desire but was told that since the Ganga is mighty and swift, the impact on the earth would be tremendous. Hence, the river would have to first fall on the head of Lord Shiva so that the waters could be led on to earth with lesser force.

So, Bhagiratha started practicing austerities to please Lord Shiva and he did succeed. Thus it was that Lord Shiva came to earth and received the Ganga directly on His head. The river flowed down from His head onto earth in 7 distinct streams and one of them flowed along the route that Bhagiratha took and he was able to revive his ancestors from ashes by the touch of the holy river. In fact, the river Ganga also bears the name Bhagirathi because it was Bhagiratha who brought it down to earth. Thus, Lord Shiva perennially bears a part of the heavenly Ganga on His matted locks.

In His early teens, Eeshwaramma used to give Swami an oil bath on His birthdays. On one such occasion, Baba declared that there was no need for pouring any water over His head. As Mother Eeshwaramma watched, water sprang forth from the top of Bhagawan’s head and spilled over her mother and another relative who was with her!

Once, Swami asked Prof. Kasturi to take his mother and wife and go on a pilgrimage to holy places such as Haridwar, Kasi, Gaya, and so on. In fact, Swami told Kasturi, “Why do you hesitate? Purchase three railway tickets for the journey. We four can travel on those.”

At every step of their journey, the trio felt Swami’s presence. At Haridwar, when they went to the Arati Ghat on the evening of their first day, they found the place already filled with massive crowds, but facing the ghat was a mini-island on which was a clock tower. From that vantage point, one could get a fine view of the lights floating on the river and being waved on the steps. Also, there was a foot-bridge. So, they walked on it and joined the group of pilgrims standing there. As the rituals began, conches blew, trumpets pealed, drums sounded, and so on. What happened next simply amazed the trio!

Kasturi writes, “The priests held high the heavy brass lamps and waved them in circles before…. Ah! Before Baba! Yes. He was receiving the ovation and the adoration. He was there for all to see — or, for us three to see, until the Arati ended, in a flourish of ‘Ganga Maa Ki Jai.’

We scarce could move, though others had crossed over. Slowly, we found our feet and our way and bending low, touched the step on which He stood so long. The Picture of Baba accepting the Arati stayed bright and benedictory, until we reached Benares and stood in the holiest of holies — the shrine of the Viswanath Lingam, when we were blessed by overwhelming ecstasy.”

Are you curious to know what happened in Benares? Kasturi writes, “On our first visit to the temple, we had darsan of Baba at the innermost shrine of the Viswanath Temple, standing there just as He is — with the crown of hair, the long orange robe, and one hand raised to bless. We could not see the Lingam. We emptied the vessels of Ganges water we had carried up the steps for the ceremonial ablution of the Lingam, on the Lotus Feet of Baba. He did not protest.”

Wasn’t that simply astounding? Not only is Sai the resident of Puttaparthi but He is the one who pervades every atom of this universe. He is everywhere! There is no place where He is not! He is the one who accepts all our prayers, whether they are to Mother Ganga or Lord Shiva Himself.